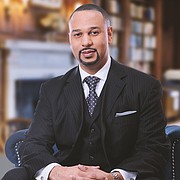 Carlos Moore, managing partner of Tucker Moore Group, LLP, says he always saw working as a defense attorney as a natural fit for him.

"I've always been passionate about fighting for the rights of others," Moore says. "I want to fight for the little guy against big corporations and the government, and level the playing field to give my clients a fair chance in court." Born in Pascagoula, Moore, 41, received his bachelor's degree in political science from the University of South Alabama in 1999 and his law degree from the Florida State University College of Law in 2002. Moore's areas of practice include personal injury, worker's compensation, civil rights, social-security disability, wrongful death, product liability and more. He is a member of the Mississippi Bar, the Tennessee Bar, the American Bar Association and the American Association for Justice, and is a former vice president of the National Bar Association. He and his wife, Natalie Moore, have been married for 17 years. They have a 7-year-old daughter named Avery Nicole Moore. — Dustin Cardon

AS REPORTED BY CLARIONLEDGER.COM (JUNE 28, 2016, BY SARAH FOWLER, WILLIAM MOORE)

JPD Commander Tyree Jones declined to comment, citing potential litigation. Monica Joiner, attorney for the city of Jackson, did not return calls for comment. In December 2013, Jackson was shot in the back multiple times by Roberts at a Jackson nightclub where Roberts was working at a security guard.

According to a JPD incident report, Roberts shot Jackson shot five times. Jackson claims he was shot seven times. Jackson said he was in the hospital for a year trying to rehabilitate and had to drop out of college at Jackson State and entered a state of depression. “I stayed in the hospital a whole year,” Jackson said. “I had to wear the bag. I couldn’t even walk, I couldn’t even use the bathroom. I barely could talk. I couldn’t even eat. I stayed in the hospital a whole year to just get right…I almost lost my life. I almost died. Literally, I almost died.” Moore filed a civil suit against Roberts in 2015, the same year he was reportedly hired as a police officer with JPD. “When I found out he was an officer, I was flabbergasted,” Jackson said. Roberts was fired from JPD Monday after a video surfaced of him appearing to strike a handcuffed suspect. Moore also represents the handcuffed man, Ladirus Brown. Moore claims the incident involving Brown could have been prevented if JPD never hired Roberts. “It is the most clearcut case against an employing agency or a city that I’ve ever seen,” Moore said. “They had knowledge of the allegation against Justin Roberts, what he did to my client. Instead of doing a thorough investigation, they closed the investigation without ever talking to my client and then they turn around and hire the man. He is allegedly shot somebody…and they turn around and hire this guy and give him a gun and give him a badge. In an intelligent, civilized, society, I don’t see how that can be possible. Somebody was asleep at the wheel.” Moore said he is hoping that, by filing an affidavit, Roberts will be unable to work as a police officer anywhere else. “What we don’t want to happen is Justin get a slap on the wrist for simple assault, go to a different city and still be a police officer,” Moore said. “If he’s convicted of a felony, he would never be able to be a cop, that’s for sure.”